Documenting Eastern Ukraine - Then and Now 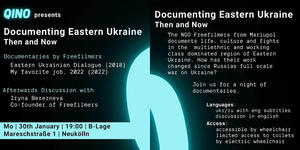 The multiethnic and working class dominated regions of Eastern Ukraine have suffered a lot since the beginning of the Russian invasion in 2014.  Eight years later, they are the regions the most affected by Russias full scale war on Ukraine. We will show two short films by Freefilmers, a collective of filmmakers from the city of Mariupol.

Freefilmers have been documenting the people, the atmosphere and the changes in Eastern Ukraine. They are building a solidarity network of independent Ukrainian filmmakers, who are eager to tell their own narratives of the challenges and the fights for freedom and equality in the region.

Afterwards, we invite you to stay for a discussion with Iryna Berezneva, Co-Founder of Freefilmers.

The films are ukrainian/russian with english subtitles. The discussion will be in english.

The entry is donation based. All donations will go to the Freefilmers fund, which is helping queer people and independent artists from Ukraine.

The film researches problems and possibilities of building a cultural dialogue in Eastern Ukrainian cities. The crew analyzes the multicultural history of the region, difficulties in cultural self-realization and attempts to make the dialogue between very different people more efficient.

CN: pictures and detailed description of violence and war scenes

In the spring of 2022, the Ukrainian city of Mariupol was surrounded by Russian troops. They were using weapons of mass destruction against the civilian population every day. In mid-March volunteers started evacuating people from Mariupol to Zaporizhzhia. They gathered after each trip to exchange the information, support each other, and talk about their traumatic experiences.